Home » Blog » National Park History » A Brief History of Cades Cove: Everything You Need to Know A Brief History of Cades Cove: Everything You Need to Know

Cades Cove is one of the most visited areas inside the Great Smoky Mountains National Park. There is a 11-mile loop road that you can take that provides amazing views of the Smokies and the opportunity to see wildlife. The next time you visit, you will have an even greater appreciation for the area once you know the story behind it. Here is the brief history of Cades Cove in the Smoky Mountains:

The history of Cades Cove begins earlier than most people realize. Although the first European settlers didn’t arrive until the early 1820s, the Cherokee Indians called the area home well before that. They used the land to hunt deer, elk, and bison. While there have not been signs of permanent settlements in the area, the presence of the Cherokee Tribe has been documented all around the Smoky Mountains during this time. As previously mentioned, the first European settlers arrived in Cades Cove somewhere between 1818 and 1821. However, once they established a settlement, they began to spread all throughout the area. By 1830, it is projected that as many as 300 people had moved to the area from Europe. Shortly after, there were major signs of colonization, including the building of log houses, churches, grist mills, and barns.

As more and more settlers came over from Europe, it became clear that more necessities needed to be built. By 1850, the population had exceeded 600 and children were starting to be born in multitudes. It is important to remember that during this time, it was not uncommon for a family to have 10 to 12 children. After a while of children attending school in farmhouses, the Europeans decided it was time to build a schoolhouse. Also during this time, there was a divide among the churches. That is why there was both a Baptist and Methodist church in Cades Cove. These buildings are still present today for your family to explore.

Formation of the National Park 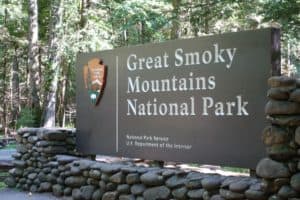 It wasn’t until the early 1920s that the states had an interest in purchasing the land inside The Cove. The first major piece of property was bought in 1927, and it included most of the mountains just north of Cades Cove. During this time, a few of the families who lived on the land willingly gave up their homes, while others fought until the very end. As people started to file out of the area, there was no longer a need for the buildings. The last school in The Cove closed in 1944 and the post office closed its door soon after in 1947.

When you visit The Cove today, you will still see traces of the early settlements. There are many historical buildings that you can tour when you visit the Smokies, including the John Oliver Cabin. This cabin belonged to John and Lucretia Oliver, who were the first permanent white settlers to move to the area. Many of the old churches and school buildings are also still able to be explored as well. In 1945, the National Park designated The Cove as a historical area so they maintain all the structures inside the park.

Now that you know a little more about the history of Cades Cove, be sure to check out this guide to the area. We hope to see you soon in the Smoky Mountains!