If you’re enjoying a winter hike through the Great Smoky Mountains National Park, you might be shocked to catch a glimpse of a black bear in the forest! Many folks tend to believe that bears hibernate throughout the winter season, but the truth is that the black bears in the Smokies are not true hibernators at all! While they do spend most of their time in their dens during the winter for long periods of sleep, it is not uncommon to see bears actively roaming around Cades Cove Loop Road and other areas of the park in January, February, and March! Here are the top 3 reasons why black bears in the Smoky Mountains don’t truly hibernate: 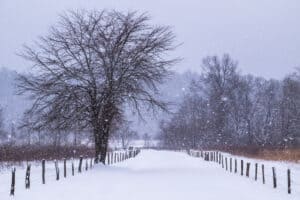 The primary reason why black bears in the Smoky Mountains don’t truly hibernate is that the winter temperatures in the Smokies are too moderate. The point of hibernation is to allow an animal to store energy when the temperature drops and natural food sources become difficult to find. However, temperatures in the Smoky Mountains rarely even dip below freezing at night and the average annual snowfall is just about 1 to 2 inches in the foothills! Since the body temperature of the black bears in the Smokies doesn’t drop like a true hibernator (chipmunks, snakes, bees, etc.), they wake up for short periods of roaming during brief warming trends.

2. Bears Are Too Large to Get Rid of the Body Heat Required for Hibernation

You may be wondering why some animals hibernate, while others fall into a deep sleep called torpor. The difference is based upon the size of the animal, as a smaller body size can adapt to winter conditions much easier than larger animals like bears. So essentially, a bear’s body is simply too big to get rid of the body heat required to hibernate!

3. Pregnant Mothers Often Give Birth to Cubs in the Winter Since pregnant mothers often give birth to cubs in the winter, they are unable to truly hibernate! The bear cubs sleep next to their mother, who will occasionally wake up to tend to her young. The cubs will also nurse until the mother is ready to leave her den. By the time the cubs come out of their dens for the first time, they are generally about 3 months old, weigh between 4 to 8 pounds, and are able to follow their mother around in the search for food!

Where to See Black Bears in the Smokies During the Winter

While you may spot bears virtually anywhere in the Great Smoky Mountains National Park, some of the best destinations include Cades Cove, Roaring Fork Motor Nature Trail, and Newfound Gap Road. The most important thing to keep in mind is that bears are wild animals that are dangerous and unpredictable, so never approach bears or allow them to approach you! Keep a safe distance at all times (at least 150 feet) and help protect their environment with the proper disposal of litter.