There is a reason so many people travel to the Smoky Mountains each year to visit. There are many reasons, actually. From its miles of hiking trails to diverse wildlife, there are so many things to see and do here. Check out these interesting facts about the Great Smoky Mountains National Park before you visit:

1. There Is No Entrance Fee

The Great Smoky Mountains National Park is one of the few national parks in the country that doesn’t have an entrance fee! You can enjoy the beauty of the mountains without having to spend a dime. This is because the land that is now the national park once was privately owned. The states of Tennessee and North Carolina paid to construct Newfound Gap Road, and when Tennessee transferred its ownership of the road to the federal government, it required that “no toll or license fee shall ever be imposed” to travel the road. 2. It’s the Most-Visited National Park in the Country

The Great Smoky Mountains National Park has 2,900 miles of streams, all of which visitors are allowed to fish in. About 20 percent of the park’s streams are large enough to support trout populations. Other angling experiences range from remote, headwater trout streams to large, coolwater smallmouth bass streams. You can fish year-round in the park, from 30 minutes before sunrise to 30 minutes after sunset.

4. There Are More Than 850 Miles of Hiking Trails One of the best things to do at the park is go hiking! The national park has more than 850 miles of hiking trails for you to explore. The trails range in level of difficulty, so everyone from kids to expert hikers can enjoy! Hiking offers gorgeous views during any season, from frozen waterfalls in the winter to wildflowers in the spring.

5. It’s the Most Biodiverse Park in the National Park System

The Great Smoky Mountains National Park is the most biodiverse park! More than 19,000 species have been documented in the park, and scientists believe an additional 80,000-100,000 may live there! There are more than 1,600 species of flowering plants, including 100 native tree species and more than 100 native shrub species. There are also about 65 species of mammals, more than 200 varieties of birds, 67 native fish species and more than 80 types of reptiles and amphibians!

6. It’s the Salamander Capital of the World Did you know that the Smoky Mountains is considered the “Salamander Capital of the World”? There are 30 different species of salamanders throughout the park. There are so many, in fact, that the majority of vertebrate animals, including human visitors, in the park on any given day are salamanders. They are most commonly found in and along streams and under rocks, logs and leaf litter in the forests.

The Smoky Mountains are rich in history. Not only are the mountains among the oldest in the world, but the national park has a story of its own to tell. The first white settlers reached the mountains in the late 1700s and forced out the Cherokee Indians who lived there. When the Great Smoky Mountains National Park was established in 1934, more than 1,200 landowners had to leave their land behind, including farm buildings, mills, schools and churches. More than 70 of these structures are being preserved in the park.

8. Cades Cove Is the Most-Visited Spot in the Park 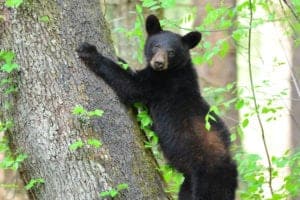 is the most-visited spot in the Great Smoky Mountains National Park. You’re going to want to pay a visit to this area during your time at the park. It’s one of the best spots for wildlife viewing, with an abundance of white-tailed deer, black bears and more. To tour Cades Cove, you can drive along Cades Cove Loop Road, an 11-mile one-way loop that circles the cove and allows you the opportunity to sightsee from your vehicle. In addition to wildlife, you’ll see gorgeous scenery and a wide variety of historic buildings, like churches and a working grist mill.

9. 550 Miles of the Park’s Hiking Trails Are Open to Horses

More than 550 miles of the hiking trails in the national park are open to horses! There are even 5 drive-in horse camps that provide access to backcountry horse trails in the park. The camps are located at Cades Cove, Big Creek, Cataloochee, Round Bottom and Towstring, and are open from April through October. The park also offers guided horseback rides from mid-March through late November!

10. Temperatures Are Never Above 80 Degrees 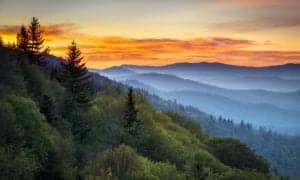 One of the nicest things about the Great Smoky Mountains National Park is that the temperature very rarely gets above 80 degrees in the higher elevations! Even on the hot summer days, the mountains stay fairly cool. Temperatures can vary 10-20 degrees from the base of the mountain to the top, so the higher you are in elevation, the cooler it gets!

Now that you know all these amazing facts about the Great Smoky Mountains National Park, you’re ready to plan your visit! Learn more about how to view wildlife while you’re here, and get ready for a fun trip to the Smoky Mountains.