Long before the first European settlers arrived in the Southeastern United States, these lands were home to the prospering Cherokee Nation. This tribe has called the Smoky Mountains home for thousands of years and has left a lasting impact on this area. Here is a brief Smoky Mountains history of the Cherokee Tribe: A branch of the Iroquois nation, the Cherokee inhabited much of the land that covers the Southeastern side of America. From Tennessee to the Carolinas, this tribe worked the land, hunted the wildlife and created homes and communities. The Cherokee typically lived in small communities, normally located near fertile river bottoms. Homes were constructed from wood and woven vines, then covered in mud for insulation. As the years went on, many tribes began building log structures as homes.

In the early 1800s, the Sequoyah invented a written language for the Cherokee. This alphabet contained 86 characters, each based on syllables found in Cherokee words. This way, it was easy for native speakers to learn how to write once they had memorized the characters. After time passed and many natives could read and write, The Cherokee Council passed a resolution to establish a newspaper for their people. Shortly after, the Cherokee Phoenix was created and the written word became readily available for the nation.

The Cherokee were mostly democratic in their early decision-making processes and many of the tribal members could voice their opinions and concerns on tribal-wide issues. When large decisions had to be made, the village council, with representatives from all seven clans, would meet to discuss. The clans in question were the Bird, Paint, Deer, Wolf, Long Hair, Blue and Wild Potato.

The society was a matriarchy, where children took the clan of their mother and kinship was traced through the mother’s family. In the same vein, women had an equal voice and power in affairs throughout the tribe. Marriage was only allowed between members of the same clan and property was passed through clan alliance. 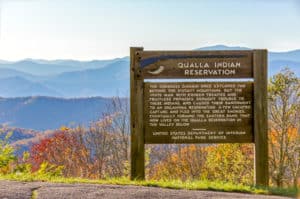 Today, there are around 11,000 members of the Eastern Cherokee Tribe remaining, many of whom live on the Cherokee Indian Qualla Boundary in North Carolina. This area is actually open to the public if you wish to visit. These tribes have fully leaned into the tourism industry, opening hotels, restaurants, amusement parks and even a casino.

You’ll find the communities of Yellowhill, Birdtown, Snowbird, Paintown, Big Cove and Wolftown all within the 56,000 acres of the Qualla Boundary. Many of these communities have adopted more modern ways of life, while still passing on their sacred traditions and Smoky Mountains history to the younger generations.