The Smoky Mountains are full of amazing history sites that your family can explore. From old church buildings to historic cabins, there are dozens of amazing structures you do not want to miss! While some places are more widely known about, there are also some hidden gems inside the national park you can explore as well! Here are 3 places in the Smoky Mountain National Park to see historic buildings: The Roaring Fork Motor Nature Trail is a 5.5 mile one-way scenic road that features some of the most amazing buildings in the Smoky Mountain National Park. Many of these structures are cabins that were once owned by the early settlers. Two of the most famous are the Ogle Place and the Alex Cole Cabin. The Ogle Cabin was a log home that was built by Noah Ogle. The thing that makes this one of the most visited historical buildings is the design. The cabin is what is known today as a “saddlebag” house. Basically, these are two structures connected by a common chimney. This design was very unusual during the time it was built.

The Alex Cole Cabin is something you will want to see because of the story behind it. This historic cabin is the last remaining building of the Sugarlands community. The owner, Alex Cole, was known as one of the most industrious residents in the area. Each week, he and his sons would walk across Sugarland Mountain to work at the Little River Lumber Company. Once tourism began to increase in the area, Cole offered up his expertise to others and began working as a mountain guide. The cabin he built can still be seen when you visit Roaring Fork.

As one of the most popular areas of the national park, Cades Cove is full of amazing historic buildings. From cabins to churches, this is one of the main areas in the park where you can see signs of old settlements. Two of the most commonly visited structures inside Cades Cove are the John Oliver Cabin and the Primitive Baptist Church. Both of these buildings can be accessed from Cades Cove Loop Road. The John Oliver Cabin was once owned by the first permanent white settlers in the area. They moved to Cades Cove in the 1820s, before there was even a working grist mill!

After more people moved into the area, it was decided that a church needed to be built in Cades Cove to save on travel time. In 1827, the Primitive Baptist Church was built just one road over from the John Oliver Cabin. This congregation was the first of three churches that would eventually be established in Cades Cove, all of which can still be seen today. 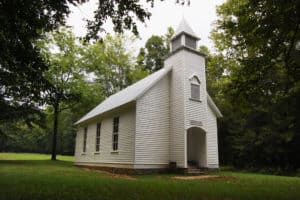 One of the most popular sites to see when you visit the Cataloochee Valley is the Palmer Chapel. It is a small methodist church that was constructed in 1898 on land that was donated by Mary Ann Palmer. One fun fact about this historical building is that it was the only church in Big Cataloochee. Because the community was so small, they could not afford to bring in a full time pastor. As a result, services were only held once a month whenever one of the circuit riding preachers came into town. When you step into the church today, you will see an old wooden cross hanging on the back wall, a piano, a pulpit, and ancient pews. When you are visiting Cataloochee, you will not want to miss the chance to see this historic worship center.

Now that you know about the best places in the Smoky Mountain National Park to see historical buildings, be sure to check out some of the other most popular places inside the park. We hope to see you soon!