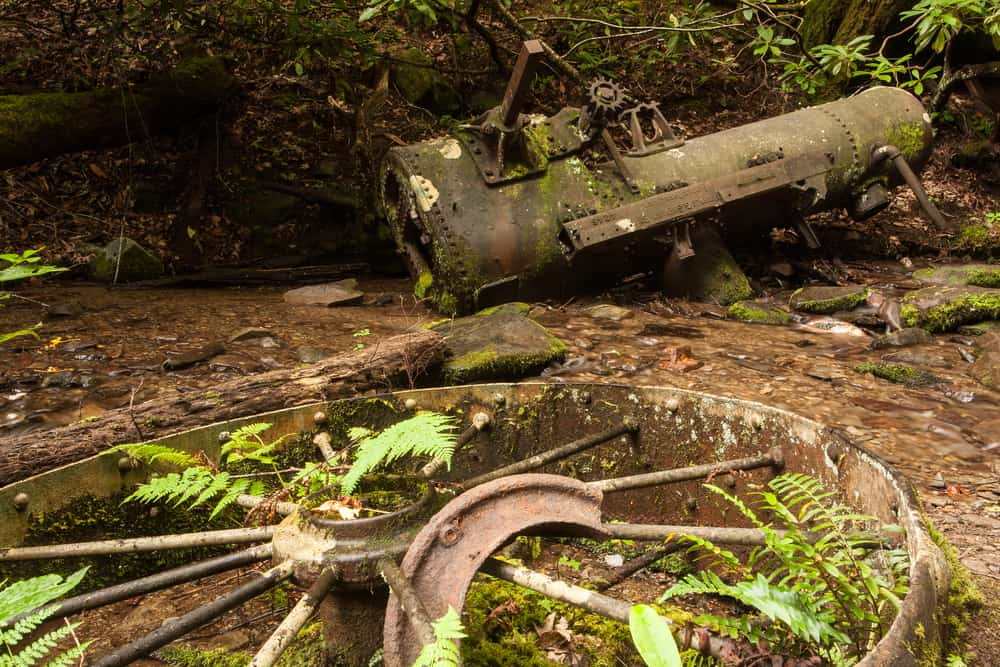 There’s nothing more exciting than finding cool places that are off the beaten path! That’s why we want to share some of the secret spots in the Smokies you’ll want to try to find while you’re visiting! From caves to secret tunnels, there are all kinds of unique places you’ll want to explore! Here are the top 5 secret spots on hiking trails in the Great Smoky Mountains: You may think we’re talking about Rainbow Falls, but there’s actually a cave with a waterfall in front of it called Rainbow Cave Falls. To get to this waterfall and cave, you’ll need to start your hike on Schoolhouse Gap Trail. Around 1.1 miles into the trail, you’ll come to a junction with Turkeypen Ridge Trail. Right past these signs, you’ll see an unmarked trail on the left, and this will lead you to White Oak Sinks. This trail is about 1 mile long, and there is another unmarked fork in the trail. To get to Rainbow Cave Falls you should go right at this fork. The waterfall is 40 feet tall, and the water doesn’t fall into a pool at the bottom, but goes underground into the cave!

A secret spot you can find while hiking trails in the Great Smoky Mountains is Blowhole Cave. Just follow the same instructions for Rainbow Cave Falls until you reach the unmarked trail fork. Instead of going right, you will go left. While you can’t enter Blowhole Cave, you can see the impressive exterior made of rock that is covered in moss and leaves. The entrances are blocked off with metal barriers. Blowhole Cave is the home of the largest hibernating colony of Indian bats in Tennessee. These creates are endangered, and experts estimate that this cave houses 6,000 to 10,000 bats. Another cool cave you can find is Gregory Cave located in Cades Cove. To get to the cave, you’ll stop at John Oliver’s cabin. There is a dirt road blocked off with metal bars, and you will hike along this road until you pass two picnic tables on the right. Keep walking until you see trees with boxes attached on the right. Past these trees, you’ll spot the rock cropping and the cave entrance. This cave is also blocked off because spelunking is illegal in the national park. You can peer inside and see markings on the walls though!

One secret spot you will want to find while hiking trails in the Great Smoky Mountains is the steam engine wreck along Grapeyard Ridge Trail. This trail is considered difficult if you do the full trail, but getting to the wreck only takes you part of the way along the trail. The first part of the trail follows a steep incline, but then it levels out and becomes more moderate. About 2.85 miles in, you will reach another steep incline, and at the top, you can look down and see the steam engine wreck. The person driving the train ran off the rails in the 1920s, and the engine was left in the creekbed ever since. The last secret spot on our list is located at one of the most popular places in the national park! This secret tunnel under Clingmans Dome was built in the 1930s by the men of the Civilian Conservation Corps. The original part of the hiking trail ran alongside Newfound Gap Road, and when these men built Clingmans Dome Road, the trail had to be moved. Instead of having hikers cross the road, the men built the tunnel underneath the road! To find the tunnel, follow Clingmans Dome Road to the access point and park your car. Follow the road about 0.2 miles until you reach the big stone bridge. Head down the hill at this point, and you’ll find the tunnel!