Discover the Fascinating History of Churches in Cades Cove

When you visit the Smoky Mountains, one of the things you might notice is the remnants of old civilizations. This is especially true in one of the national park’s most visited areas, Cades Cove. As you make the drive around the 11-mile loop road, you will notice there are a variety of old church buildings scattered around the property. Discover why that is with this history of churches in Cades Cove:

Believe it or not, the first churches in Cades Cove were not founded until 1827. Before that time, people had to travel through the mountains to Wears Cove to find a church service. Over time, residents grew tired of having to travel such a long distance, not to mention there was a divide caused by a biblical interpretation about missionary work.

The people of Cades Cove decided they needed their own church building. Between the years of 1827 and 1832, members of this new congregation met in the homes of their members. Finally, in 1832 they built a church made out of unfinished logs. Obviously, this is not the church that sits in the area today. That building was not completed until 1887, but it still remains in Cades Cove today just past the John Oliver Cabin. 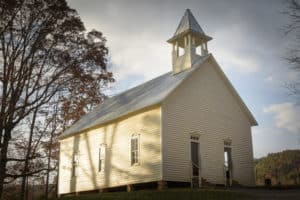 Although the Methodists were active in Cades Cove as early as the 1820s, they did not have an established church building until 1902. There are two numbers that are the most interesting when you talk about this famous structure. It took them a total of 115 days to build the church, and it cost a total of $115! When you visit the church today, you may notice there are two front doors.

The reason for this is because men entered through one door and sat on one side of the church, while the women were forced to use the other entrance and could not sit with the men! As you drive along Cades Cove Loop Road, this will be the third building you come to. Around the building, you will notice a small cemetery that contains at least 100 graves.

Split in the Baptist Church

As we mentioned earlier, there was a split in the original Cades Cove Baptist Church. This is what led to the creation of the Missionary Baptist Church. In what became known as the Anti-Divisional Split, Pastor John Adams and his congregation opened up their own church in 1841. After the completion of the Civil War, they were able to build their permanent structure on Hyatt Hill in 1894.

In the years to follow, the congregation grew to over 100 members, which caused them to build a new and bigger church. The building you can now tour in Cades Cove was built in 1915 by members of the church.

Now that you know about the history of churches in Cades Cove, check out some more history about this amazing area! We look forward to seeing you soon!